How to find applications for dormant technology within adjacent markets

In 1960, William Greatbatch was developing a gadget to record irregular heartbeats, which required a 10,000 mega-ohm resistor. Instead, he only managed a one-mega-ohm resistor and failed in his attempt to create a device that recorded irregular heartbeats. However, he noticed that the circuit pulsed in a way that was similar to a human heart. From there, he changed the direction of his work and the world’s first implantable pacemaker was born.

Not everyone is as lucky as Greatbatch. But, with the wealth of information we have today, there’s no reason why you can’t revive failed technologies in adjacent markets.

A study by Bain & Company reveals that the most successful adjacency moves start close to and complement your own best product. And companies that successfully moved into adjacent markets had a common characteristic—they applied rigorous screens before making an adjacency move.

One way in which you can apply rigorous screens is by analysing patent data. Patent documents contain a wealth of technical information about inventions. Understanding how one technology may be used in different industries can help you find opportunities in adjacent markets.

You can use patent data to find adjacent market opportunities by:

Find companies to which you can out-license

Moving into an adjacent market can be risky, so licensing your technology to a company already in that market—with an established customer base—may be a better option.

For example, Honeywell is well-known for its thermostats. As the market leader, it believed it would also be good at making thermostat software. However, smart software wasn’t part of the company’s core competencies. This cost it a huge share of the market when Nest popped up and started to dominate the smart software market.

After a patent dispute between the two companies, they decided to settle and now share a long-term cross-license agreement. If your tech isn’t part of your company’s core competencies, it may be worth licensing that invention to another company that’s already successful in a relevant adjacent market.

You can analyse potential licensees of your technology, using patent analysis tools like PatSnap’s Licensee Locator playbook. As the name suggests, Licensee Locator is used to find and rank potential licensees of a patented technology. It applies a “licensability score”, which takes into consideration the similarity of companies’ patent portfolios, number of relevant patents, culture score (based on acquisition and licensing history) and licensee strength (based on company sales and revenue). These factors can indicate the suitability of a company to license from you.

For example, below is a Honeywell patent titled, “Automatic thermostat schedule/programme selector system”.

Analysing international patent classification (IPC) charts can reveal technologies related to yours which have different applications. This is a quick way of understanding different technology areas you could move into.

Analyse forward citations to see how your technology is evolving

Analysing forward citations of patents helps you understand how others are developing technologies related to yours. This can also help you understand the evolution of new applications of your technology. If companies are citing your patent, they could be interested in obtaining a patent for a similar technology.

For example, Toshiba abandoned its patent protecting a “manipulator system”. The patent has been cited 412 times, mainly by companies in the medical devices industry—such as Covidien, Ethicon and Surgica Robotica.

However, one company which stands out is Apex Brands—a maker of power tools. Analysing forward citations could reveal a use for your technology in a market which you never considered.

Commercialise your technology in another jurisdiction

An alternative adjacency move is to commercialise your technology in a different geographic market, where similar technologies are prominent. For example, the map below shows the geographic spread of patents relating to “force-torque sensor”. The United States and China have the highest numbers of patent filings relating to this technology, followed by Japan. Such information could help you commercialise your technology in a foreign market.

Find out how you can discover new innovation opportunities

Watch this webinar, hosted by Pari Datta, senior innovation and research consultant at Cambridge Design Partnership, to understand how you can discover new opportunities using technology mapping and IP data. 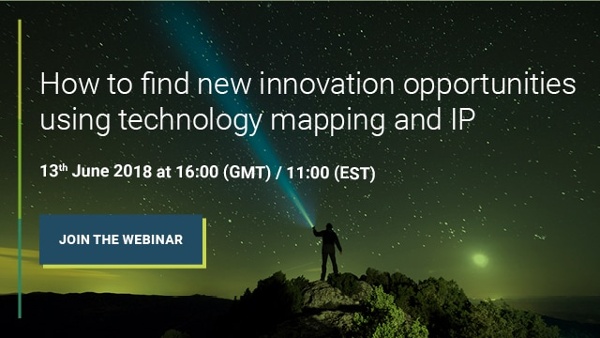