What do batteries, secondary batteries and fuel cells all have in common? Well, they all feature in the Electric Vehicle Energy Storage IP Report. The report, by PatSnap, looks at intellectual property (IP) data of modern innovators developing energy storage solutions for electric vehicles. It analyses over 97,000 patents globally—with some dating back to 1921. And it highlights how this market, its players and their technologies are evolving. 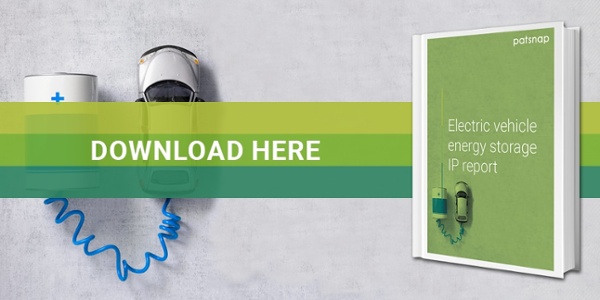 The latest data shows that 2016 had the highest amount of patent applications—already a 50% increase on the previous high in 2015. While 2016 is expected to rise a little more, 2017 is predicted to dwarf that further.

Nearly a third of all first filings for electric vehicle energy storage patents have been made in China, who have overtaken Japan in recent years. China’s lead is set to grow—a staggering 83% of all priority filings in 2017 published to date were made in China. But this activity in China isn’t only being driven by Chinese applicants. Some Japanese businesses appear to be moving their patenting activity to China. But it doesn’t seem to be just that simple.

Six of the top ten applicants for EV energy patents are Japanese multinationals. Concurrently, six of the top ten are also well-known automotive manufacturers—Toyota, Honda, Hyundai, Nissan, Ford and Daimler-Chrysler. 550 patents have been published for Toyota in 2017 (at the time of report creation, although this number grows daily) in comparison to Hyundai’s 281—almost double. Toyota is also topping the priority filing Chinese application list and its activity is on an annual increase.

The Chinese boom is likely to be driven by the Made in China 2025 initiative. Emerging Chinese businesses, Borgward, Thunder Power, TGOOD and Weilai may not be household names, yet, but could their new approaches signal a future change in innovation leaders for energy solutions in electric vehicles?

The biggest tech trends can be identified by looking at international patent classifications (IPC). IPC H01M—"direct conversion of chemical to electrical energy” shows up in more than one in every four patent applications. And approximately one in three references IPC group H02J7—“arrangements for charging/depolarising batteries”.

The most valuable patent for energy storage in electric vehicles is owned by Massachusetts Institute of Technology (MIT). US9450421—“Wireless non-radiative energy transfer“—talks about using oscillatory resonant electromagnetic modes for wireless energy transfer. This patent is currently estimated to be worth nearly $33million.

Fascinatingly, iRobot—known for creating the Roomba vacuum cleaner—also features in the ten highest valued patents for electric vehicles. US20170072564A1—“Autonomous robot auto-docking and energy management systems and methods”—describes a domestic robot that can be set-up once and then be left to its own devices. And this technology appears to have potential for the wider EV community.

What is clear from the amount of new investment and businesses—particularly from China—is that with the right approach, there is still time to grab a slice of the action.

Many businesses patenting this technology are unsurprisingly automotive companies. The old guard are compelled to continue to broadly develop across the entire tech landscape to retain their competitive advantage. The opportunities for new businesses often lie in identifying niches around existing tech and making targeted specialisations. This approach could also prove to be the most profitable.

China have succeeded, in just two years, to disrupt the patenting world map for energy storage in electric vehicles. An industry previously dominated by Japanese companies has now been turned upside-down by well incentivised Chinese start-ups. And it’s difficult to imagine advances influenced by Made in China 2025 will end before 2025.

As has been seen by German businesses after Industry 4.0 and this new initiative in China, nations that are willing to heavily invest into next generation technologies, may reap the benefits of a concerted nationalised effort and lead the charge. This sort of approach could also encourage budding innovators and entrepreneurs from overseas to set-up shop in your backyard, creating a competitive and innovative boost to economies.

As a summary to this report, the author informs that within two days of creating this report, 57 new patents were published relating to the original query, just demonstrating how fast this technology is evolving.

Get your hands on the Electric Vehicle Energy Storage IP Report by PatSnap for free.