The dangers of failing to track your competitors’ R&D

Be honest with yourself—when did you last track your competition?

Not actively monitoring your competitors can have serious implications for your business. Blockbuster dominated the video and DVD rental market at the turn of the millennium. Blockbuster dismissed a new competitor, Netflix, who introduced subscription DVD rental by post. This transitioned into a relatively novel streaming service—rendering Blockbuster’s antiquated business model obsolete. Blockbuster had a ten-year warning to try to change its fortunes—before bankruptcy and the inevitable demise of the business.

You may think that you only have competition with companies that have been your rivals for years. But, who’s not to say that another smaller company—or a company that traditionally hasn’t been your competition—may crop up and disrupt your industry? Cleaner, faster and better innovations come from any angle, would you know how to see these threats coming early enough to react? If your competitors are tapping into other markets and getting additional revenue streams, that’s an opportunity you’re missing out on. And what if you think you’ve developed the next best innovation for your industry to find out that your competitors have got there first, and have done it better? These risks are already high, and if you aren’t effectively tracking your competitors, it could cost your business—like it did for Blockbuster.

How would you know:

When you think of your competitors, long-standing rivals probably come to mind. Pepsi might say Coca Cola, Apple could identify Samsung and General Motors definitely watches Toyota. But what if someone told Babyliss 5 years ago that it would be competing with Dyson in 2016?

If you’ve only focused on known competitors that you have been rivalling for years, there’s a chance that you’ve missed out new innovative companies—those who aren’t on your radar. Dyson’s patent for its Supersonic hair dryer was published back in 2013—it took three more years before the Dyson hair dryer was launched to the market.

Anticipating this kind of competitive information, provides a window of opportunity to take action, respond and make improvements to your product. A survey revealed that on average, only 23% of participants learned about a competitor’s innovation early enough to respond before it hit the market. By tracking new or smaller competitors, you have the upper hand because you can use information about their R&D to help shape your innovation strategy and respond to new threats in your market.

You risk missing out on key trends in your industry

By knowing which direction your competitors are moving in, you can learn from their innovations to help improve your own products and dominate the industry.

One company that didn’t react quickly enough to industry trends is Kodak. Kodak missed 3 opportunities to dominate the digital photography trend despite being the first to develop digital cameras. Kodak invented the digital camera in 1975. However, thinking digital could damage its money-spinning film-based business, it tucked away the digital camera to the back of the closet. When the digital photography boom happened, Kodak were on the backfoot. The market soon became dominated by competitors like Fujifilm, Nikon, Sony, and Canon—who kept innovating with newer features like face detection, smile detection and in-camera red-eye fixes. Instead of leading the trend, Kodak was blurring into the background.

Secondly, Kodak missed the photo-sharing bandwagon. It launched EasyShare-One which was a Wi-Fi enabled camera. However, the camera didn’t sell well and Kodak quickly killed the line. Soon enough, a new company Eye-Fi had created a successful business around Wi-Fi enabled SD cards for cameras.

Finally, Kodak bet big on digital photo frames and photo printers. But—other than professional and budding amateur photographers—consumers didn’t really get their photos printed and didn’t have a need for a photo printer. Instead people would get their photos printed and ordered from online services like SnapFish. And with most people taking photos on their smart phones, they were only going to print photos that they really cared about. Perhaps if Kodak had assessed the industry trend to validate and improve its innovations, it could have still remained in the picture.

You risk missing adjacent markets where your competitors are innovating

When you’re not tracking competitors, you may miss out on any move they make in an adjacent market. By tracking your competitor’s movements, you could unlock a lucrative industry for an additional revenue stream. Take Apple for example. It moved from computers to mobile and completely took over the MP3 business. Now, we cannot imagine having separate devices for making calls and playing music. Similarly, Apple entered the watch market to make smart watches. Apple's latest patent filings also indicate that they are looking to enter the footwear market to make sensors for shoes.

If you know which industries your competitors are infiltrating and how they are evolving their products to solve a problem, you could also tap into that market to reap the benefits and diversify your portfolio.

Your competitors may be developing similar technology to you, and doing it better

Google wasn’t the first search engine to be on the scene. Before Google, we had Yahoo, AskJeeves, Netscape and many more. Google didn’t do anything new by launching a search engine—it just did it better than its competitors. Google searched faster, crawled more webpages, showed more relevant results and was user-friendly. Tracking your competitors can give you an insight into the strengths and weaknesses of their products. By assessing where your competitors' R&D falls short, you can identify areas for improvement or find the white spaces in your market where your competitors aren’t innovating.

Insight from patent data “telegraphs” how other innovators foresee the future and are reacting to it. This not only reveals what companies are doing—it reveals what they are preparing to do. 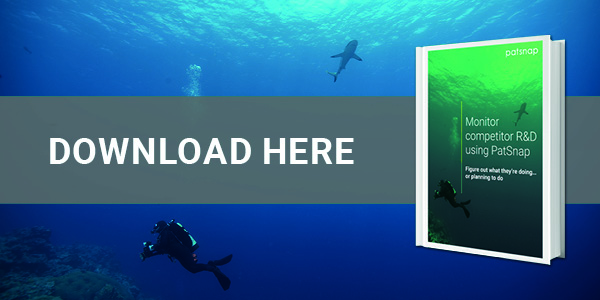