Canada’s legalisation of marijuana, starting on 17th October 2018, along with continuing legalisation in the US, has opened new markets for functional wellness beverages and foods. The size of the functional beverage market alone is estimated to be approximately $14 billion, and the hemp extract market is poised to explode to $2.1 billion by 2020.

This explosive growth is making companies across the food and beverage industry sit up and take notice. High-profile names such as Coca-Cola, Diageo, and Molson Coors have all separately announced their intentions of joining this growing market. Heineken has already launched a beer-flavoured sparkling water infused with THC and CBD, and smaller companies such as Botanic Lab, Cannabiniers, and Tarukino have released their own cannabis-infused beverages.

In emerging markets, such as cannabis edibles and beverages, it is often useful to understand the competitive landscape from a market and IP viewpoint. Market reports can often only tell a little about innovation within a new market. Patent data can reveal what products and techniques companies are actually working on. Indeed, the failure to thoroughly map the patent landscape at an early stage in the R&D process can lead to other problems with product development, branding and marketing expenditures.

Using PatSnap Analytics, we have analysed the current patent filings of innovators in the cannabis food and drink area to reveal signals about how this market, its players and technologies are evolving.

Insights by PatSnap shows you, among other things, the rate of patent filing in a specified area of interest. Reviewing the filing trends over time may provide a gauge of how early or mature a certain technology area is.

It is obvious that there has been significant growth in filing activity in the cannabis food and drink area, with the number of patent filings steadily advancing since around 2012.

Early protection of intellectual property rights is a critical component in any business’ efforts to secure a competitive advantage in the marketplace. As cannabis is legalised in more regions, more companies are likely to move in and patent their inventions.

Confidence may be lacking though until full US federal legalisation comes. This federal illegality of marijuana means the industry lacks clarity over how intellectual property rights would hold up if challenged in a US federal court.

The below graph shows innovation specifically in the cannabis-infused edibles area. We see activity has increased significantly from 2015, however, there are many fewer patents in this more specific area, than the wider cannabis food and drink area. The relative lack of patenting in the area of cannabis-infused edibles could point to a looming patent war as companies begin filing with the confidence that legalisation brings.

Patent landscaping is a 3D, topographical representation of the patents within a technology space, giving you a 360° view over any area of interest. The peaks indicate areas with a high patent count, while valleys and “white spaces” represent areas with minimal patent filings and unexplored frontiers.

These landscapes give a good idea of the make-up of the cannabis food and drinks technology area, as well as where each company’s speciality within this field lays.

In the landscape above, we map where the high-valuation patents are and where the patents from the top applicants are on the landscape. From this we can see that the areas where both BASF and Firmenich have a high density of patent filings, are also the areas with a high number of valuable patents.

Which companies are leading patent filings in this area?

The chart below shows the top ten companies which have filed patents in the cannabis food and drink area. Surprisingly, the list does not include any of the larger food and beverage companies one might expect to appear, e.g. PepsiCo, Coca-Cola, Nestle, General Mills, Kellogg’s, etc. However, the top ten applicants do include a mixture of chemical companies, such as BASF and Arkema, with fragrance and flavouring companies, such as Firmenich and Givaudan.

This gives some insight into whom those food and beverage companies should perhaps be working with when looking to enter this area.

To find out more about innovation in cannabis compounds for food and beverage, download our free 20-page report. It uses patent data analysis to reveal innovation opportunities, and explores the current patent and competitive landscape, and how this technology area is changing. 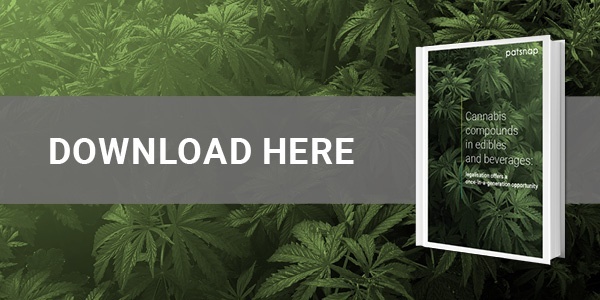