How to handle a legal action on patent infringement

A patent lawsuit can be daunting—especially the first time. Sometimes it’s unclear why the other party has accused you of patent infringement, which might make you feel like you’re in the dark. But, you don’t need to assume the worst. Although the US has seen an approximate 25% decline in patent infringement suits since 2015, lawsuits still need to be taken seriously because it could be a drain on your company’s finances and revenue.

I caught up with Logendra Naidoo, CEO and Founder of Planetary IP, who explained the best approaches to take when handling a legal action. Logendra explained that you should:

Prepare and alert management for litigation and the costs involved

Litigation isn’t cheap. Whether or not the legal action goes to court, you need to gather the right information and prepare management about the potential outcomes including possible­ legal expenses. According to the American Intellectual Property Law Association (AIPLA), litigation costs for settlements vary between $600,000-$2 million. If they go through to trial and appeal, the costs increase to $1.2-3.5 million.  When the plaintiff is seeking damages of more than $25 million, the AIPLA says pre-trial litigation costs are $1.4 million. By alerting management at the earliest opportunity, they can prepare for litigation costs and in the worst-case scenario, the affected revenue.

“Identifying the exposure to the business now and in the future can help establish an accurate risk assessment,” says Logendra. “Working with a patent infringement notice (or projecting possible outcomes during a litigation) which could hamper your revenue, should be part of your business case.”

Know who you’re up against

Once senior management is up to speed, it is time to start gathering information about your accuser company’s litigation history. This could reveal important information that could help prepare you for litigation and give you an understanding of who you are up against.

Gather and analyse as much as you can about the patents

A common mistake, when dealing with patent infringement litigation, is formalising your arguments too early without looking at the relevant information. Gather as much information about the patent as you can by looking at claim charts and prior art. Looking at the claims will ensure that the allegedly infringed patent—and the technology described within it—is fully understood. Without this information, you could miss a differentiating feature in your product which could help reduce litigation costs. Doing a patent search and analysing patent citations can help you find prior art which could invalidate the opposing party’s patent. If you discover invalidating prior art, make sure it's public or keep a version of your products and supporting documents archived. This could help to negotiate a better settlement figure or, even better, render the case null and void.

Logendra says, “This [prior art] can be kryptonite in a patent dispute when you claim, ‘not only do we not infringe, but we had that idea before you did… here’s the evidence!’ This is often due to the sharing of their infringement analysis. Use their own words and turn it back on the plaintiff.”

Logendra gives an example of a major smartphone maker who was up against a formidable non-practicing entity (NPE). The issue concerned a software process outlined in a patent and the proportionate revenue affected was high. Logendra realised the same NPE had sued his former client, in which case prior art had been filed in one of their responses before the trial. Once prior art is court record, even if a settlement transpires in another case, the patent can be used if your patent is being disputed. Logendra says, “In this case it was helpful because the prior art I dug up concerned a device that predated the patent by almost 15 years. A few trips to the equipment cage in the basement, plus researching the client’s internal archives worked wonders. The smartphone maker was able to avoid a costly settlement figure.”

Prior art searches are not simple, but a good place to start is by doing a patent analysis of similar patents and their claims.

The image below shows a claim tree for a patent which can help you understand the novel features of that technology.

Patent citations are like a paper trail of patents that have inspired and influenced later tech advances. Analysing patent citations can help you identify prior art that could invalidate the opposing party’s patent too.

A methodical search process is essential to finding prior art. “PatSnap’s search utility may find predating patents that were overlooked by the examiner,” says Logendra. “But, exhaustive public domain searches are usually fruitful in my experience. Eventually, you find good prior art with the right search strategy and tools.”

Involve technical experts in your discussions

To invalidate the opposing party’s patent, every claim in the patent must be invalidated. However, limited access to technical experts during a counter-infringement analysis can prolong the progress of a legal action. Input from engineers at your organisation can help invalidate the patent because the engineers can demystify the technology described in the claims.

Logendra says, “Often, accusers of patent infringement misunderstand the products themselves. I’ve seen cases where the examples in the technical documents provided are wrong and it creates a false premise of infringement, that upon technical review is baseless. Don’t cave early. Read, and keep on reading, until the potential flaws in their argument are discovered.”

90 percent of patent lawsuits never make it to trial. And because patent infringement cases are long and costly, most parties usually discuss a settlement once the court rules on the patent claims interpretation. Logendra says, “Most competitors know full well that the closer you get to an actual trial date during litigation, it’s very labour intensive and costly. So, while it seems unclear early on, how far they want to take it, the reality is that they will want to do what’s necessary to circumvent going to trial.”

The most beneficial approach is to have joint discussions about a settlement with the opposing party. This could help with overcoming the legal expenses because you could negotiate a better settlement deal. In consultation with your legal team, look at the option of proposing agreements that take into consideration revenue from infringing or non-infringing product features and the most relevant markets where the revenue comes from.

“The most persuasive technique to seek lower royalty payments in the potential settlement, is to create scenarios of infringement that take into account specific features that can serve to isolate the respective revenue,” says Logendra.

“If the damages are broadly based on the entire product sales in a country, look at ways to reduce the relevant sales based on specific product functions that can be separated from the aggregate revenue.”

Being accused of patent infringement can be overwhelming, especially if you’ve tried hard to protect your business’ R&D. But if you want to handle a legal action appropriately, it’s important not to panic and rush the process. A better approach would be to gather as much information as you can about the patents in question, and ensure your technical experts help you along the way. It’s likely that the legal action won’t go to court and you may be able to negotiate a settlement which could be more favourable to you.

Logendra is an entrepreneur and patent strategist with 20 years of intellectual property management experience, including oversight of major and minor patent disputes with Fortune 500 companies and non-practicing entities.

He can be contacted via www.planetaryip.com.

How can aligning intellectual property and innovation strategies have a positive impact on reducing risk? Watch this webinar with guest speakers Jon Calvert from ClearViewIP, Candice Landry from 10e5 solutions &  Jim Hinton from Bereskin & Parr who will share how. 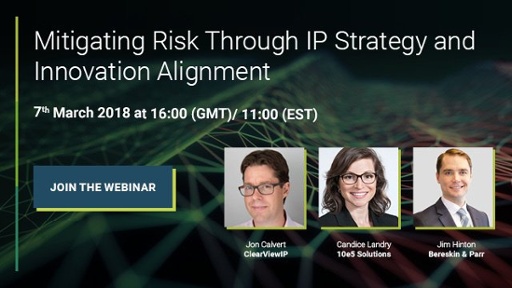