Why Huawei, ZTE and Lenovo are Investing Heavily in R&D

Chinese Patent Applications are Sky Rocketing. The Financial Times reports that patent filings by Chinese companies have risen 30-fold so far this century. The number of patents filed in the world’s five most important IP offices (Europe, US, Japan, China, and South Korea) by Chinese applicants grew from 331 in the year 2000, to a remarkable 9,767 in 2012.

According to WIPO data, just four Chinese firms accounted for over 7,500 patent applications in 2014, putting them in the top 25 companies globally in terms of patent filings. In 2015, two of the top three companies filing PCT applications were Chinese (Huawei ranked #1 and ZTE Corp at #3). You can see in the graph below how the number of patents being filed within China is increasing at an exponential rate.

What are the 3 main reasons for the explosive growth in Chinese patent applications?

One explanation for the growth in Chinese patenting activity is encouragement from the Chinese Government, which has provided incentives in the form of patent subsidies. For example, in Shanghai, domestic invention patents receive 3000 yuan, and an additional 10,000 yuan for each foreign country the patent is filed in, up to a limit of 30,000 yuan (Source: Marshall IP). These subsidies are administered at provincial or municipal level, and have been shown to increase patent filing activity, although research suggests that the patents produced are of a lower quality.

There is a clear skew in the type of patents that are being filed by China-based applicants. More than 85 per cent of China’s IP5 patents (those filed in one of the world’s five most important IP offices) are in telecommunications, computing, digital communications and audiovisual technology. Pharmaceuticals and chemicals, by contrast, are barely represented.The graph below represents the IPC areas that Chinese companes are filing the most patents in.

This level of patenting activity highlights China’s transition from low-wage manufacturers of technology, to an increasingly important nation of technology producers and consumers. China’s consumer electronics market recently overtook Japan and the USA to rank as the biggest in the world, and is likely to continue to grow.

WSJ recently reported that Chinese technology giants including Huawei Technologies, ZTE Corp, and Lenovo Group are aggressively investing in R&D, patent licensing and acquisition to build a robust legal defence against competitors such as Apple and Samsung. Xiaomi Corp recently agreed to buy 1,500 patents from Microsoft Corp as part of its strategy to gain ground on Western rivals.

China is playing a growing role in global innovation, expanding their business presence overseas and building increasingly international brands. As Chinese companies take their innovations abroad, they are availing themselves of the strong Intellectual Property protection afforded by the markets they are expanding into, which is evident in the number of overseas filings by Chinese applicants. This graph below on the left shows the breakdown of the location of overseas China patents. The graph on the right shows China’s expansion overseas by looking at the number of patents filed

"Global IP applications provide a good indication of the incidence and location of innovation, and help companies seeking IP protection in different markets… "We see that Chinese enterprises are picking up their pace in doing business overseas." said Chen Hongbing, director of WIPO Office in China, speaking to China Daily

At a press briefing in March, WIPO chief Francis Gurry commented on the relentless growth of Chinese patent activity: "It is quite extraordinary the numbers coming out of China," Gurry said.

This, he said, "demonstrates a massive buy-in to the intellectual property system on the part of China. They are the number one users of it in the world."

And, as innovation continues to support strong economic growth (China’s economy grew 6.9% in 2015 and the government has recently approved a full-year growth target of 6.5 – 7% for 2016), it is likely that this trend will continue. 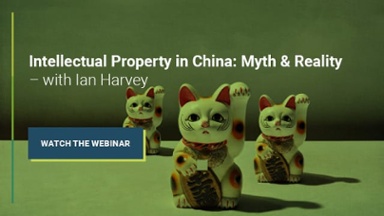