During 2016, over 2 million suspected infringing counterfeit goods were detained by border force. IP crime not only impacts the UK economy but also undermines legitimate businesses who work hard to innovate.

The IP crime report details the key trends in IP crime from 2016 to 2017 and the initiatives that the Government has set to counter it.

These threats are being met with a range of approaches, including agreements between IP rights holders and search engines, new legislation, international agreements and educating consumers about the importance of IP rights.

In 2016, the Government published a four-year IP strategy to ensure that effective IP rights remain a priority.

The Government’s objectives ensure that:

Over 490 million URLs with infringing content on search engines have been referred to Google and Bing, and 63 infringing websites have been blocked through Court Orders. Furthermore, the UK interactive entertainment (Ukie) report states that 150,000 suspicious links have been reported, with 85% of those removed.

Operation Jasper is one of the biggest enforcement operations in the UK. It’s targeting criminals who exploit social media channels, such as Facebook Marketplace, to sell counterfeit goods and commit IP offences.  This has led to 12,000 listings of counterfeit goods being removed from Facebook.

The Government has introduced agreements globally

The Government has continued judicial exchanges with China and has IPO attachés in India, Brazil, Geneva and South East Asia. This will help develop an understanding of the challenges posed by illicit streaming devices. The IPO is also working with WIPO, EUIPO, EPO and the European Commission to deliver IP enforcement training worldwide.

Consumers are being educated on the importance of IP

To educate the public about the importance of IP rights, the IPO has introduced “Cracking Ideas”—an educational IP hub. It brings together materials covering all forms of IP to educate the public—mainly children from key stage 1 to 4.

Want to learn more about IP crime in the UK? Join our webinar with Miles Rees, Senior Enforcement Agent at the IPO, covering the IP Crime Report in more detail. 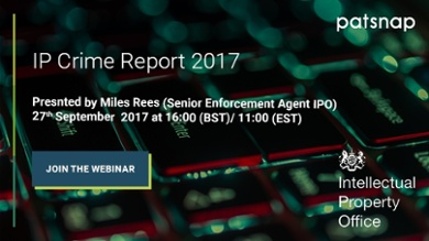