How can large companies innovate better than their smaller, more agile competitors?

Larger companies often worry that smaller and more agile competitors may beat them to market. However, large established companies have many advantages—more resources, more people and an existing market. Yet, the fear of change could be limiting their ability to innovate better than their smaller opponents.

Large companies are notoriously struck with bureaucracy and red tape. Even simple changes require approval from multiple stakeholders—slowing the whole process down. Pieter explains, “I was in a company where one of my clients found a way to immediately—with one switch of a button—save a million euros per year. It took them over one year to get that decision through all the steps. They lost over a million euros because they were so slow in decision making.”  What would a million-euro saving look like on your bottom line?

But it doesn’t need to be that laborious or costly. To expedite decision making, Pieter suggests that the Teal movement—where company structures are flat—might hold the answer.

“When companies get larger, they need more structure and layers of management. They lose flexibility, agility and speed. I see good things in the Teal movement, where you get large companies that are completely built up in a flat way by self-governing teams. I think that’s a great way to tackle it but not every company is ready for that."

You might fear letting go of your tried and tested practices. But it’s important to adapt them before they stop working. By eliminating old-school bureaucracy, you’ll achieve quicker decision making—giving you the advantage of combining your hard-earned resources, people, existing markets and newfound agility to release an innovative product to the market before your competitors.

Innovate from within your organisation rather than acquiring new companies

Rather than acquiring new companies, businesses could look at the talent they already have. Too often, employees aren’t given the room to innovate where they want, they get frustrated and end up leaving, taking their expertise to competitors—or starting a new company in the same industry. Take the example of the “Traitorous Eight,” a group of engineers who left Shockley Semiconductor to start up Fairchild Semiconductor and later Intel—now one of the largest semiconductor companies in the world.

Pieter explains, “The internal world is even more interesting and not as developed yet. And I think there's a tremendous amount of good ideas being lost by not focusing on what do we have for ourselves. The large companies have the expertise and the knowledge, but they tend to keep their internal people focused on the operations a lot. I think it would be wonderful if we could use the digital transformation, for example, to free up time for the internal capital to start innovating.”

Larger enterprises have an existing market where they can try their innovations. This is harder for start-ups to establish because if they want to innovate in other areas, they’ll usually need to find additional capital from investors.

One enterprise solution could be to divide teams into different units.  You could have one R&D team that focuses solely on incremental innovation for the existing market, but then have subdivisions that focus only on disruptive innovation. Or you could start internal think-tanks where employees with expertise in different areas can bring their ideas forward.  A few large companies have implemented a similar process, such as Adobe Kickstart. Adobe Kickstart is an initiative where any employee in the company can take part in a two-day innovation workshop where they are given $1,000 credit card to test out an idea and build a prototype. These prototypes are pitched to executives, and if they like it, the projects get taken to the next level of funding and testing.

Pieter explains, “When you ask your own people to think, to use their expertise, and to think about innovation and help the company, that helps build their engagement with the company tremendously because it's not an outside consultant, it's not a company we’ve bought, but it's something we did ourselves. And that makes employees proud for being part of that.”

Collecting data isn’t enough, you need to manage it

Some large companies struggle with managing data—often having more than they know what to do with. Or worse, their focus is on capturing lots of data to answer questions that they already know the answer to. Instead larger businesses need to combine their data with creativity. According to Pieter, “you need three things to innovate; motivation, creative skills and expertise. In the digital age, giant data sets are part of that expertise. The better they are managed and clearer the data is, the more concrete things you can do with it.”

Effectively managing data can help you reveal patterns and connections across different data sources and reveal non-obvious findings. This can provide direction for your innovations. For example, if you work for a biotechnology company, you could analyse different patents to reveal hidden trends and new technologies.

Make your team feel safe when experimenting with new ideas

Team safety is essential when you want to innovate. A novel idea that hasn’t been tested carries higher risks than other ideas. Larger companies can absorb those risks more easily due to their existing market presence with their current offerings. A failed concept won’t stop the company’s main business—whereas in a start-up it could be the only offering. Pieter explains, “newness means things haven’t been tested before and therefore at higher risk. You can only do the crazy innovative stuff when you feel safe in your team. Even if your innovation doesn’t work, you need to be sure that no one will laugh at you or put you down because it didn’t work.”

R&D leaders should also coach their employees to see errors as sources of learning and improvement. Employees need to be able to take those risks and not be held to blame if they fail. For example, one study revealed that stable teams and teams with managers who take on the role of a coach are more likely to adopt a problem-solving approach and less likely to adopt a blaming approach towards errors. Only the blaming approach is negatively related to manager ratings of innovation.

A report by PwC revealed that 65% of companies that invest over 15% of their revenue back into innovation, indicated that aligning business strategy with their innovation vision was their top management challenge. The report also shows that random acts of innovation do not always result in great returns.

Larger businesses should be focusing on just a few new projects rather than innovating in lots of different and unrelated areas. There has to be a connection between the innovation strategy and the company’s overall goals.

Pieter is the Managing Partner at Bedenk, an innovation consultancy. He is an expert in business creativity, focussing on the front end of innovation. His mission is to make teams more creative so they can find and develop solutions using their own expertise.

He does this by:
• Embedding a culture of innovation within organisations
• Facilitating innovation processes
• Training teams in innovation skills

Watch this webinar, hosted by Robert Weidner from DMI, where he explains the shortcomings of the Stage-Gate process. 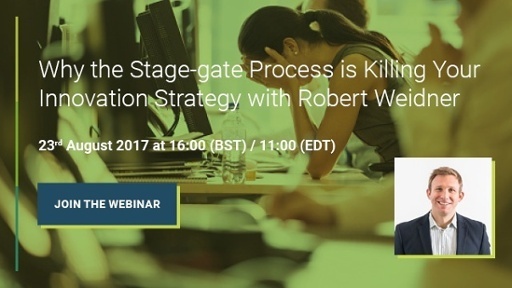