Where do you look to find out what is happening in the world of intellectual property and electric cars? Well, my first port of call was The Electric Vehicle Intellectual Property (EVIP) Report 2018 by PatSnap. It analyses over 97,000 patents globally—with some dating back to 1893. 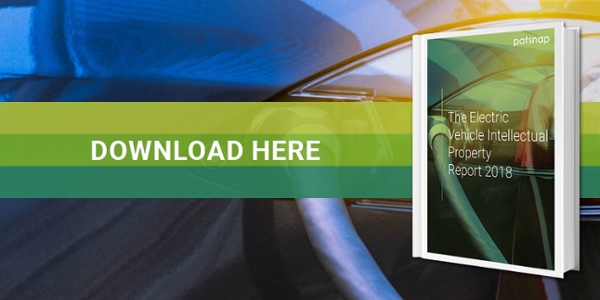 The application trends for electric car patents is on the rise—2015 had the highest amount of patent applications to date—although unpublished applications from 2016 and 2017 are both expected to leapfrog that number.

It turns out that Hyundai, Toyota and Kia are the top applicants for electric car patents. These 3 are joined by electronics giant Hitachi, who—perhaps ahead of their time—built Japan’s first 5-horsepower induction motor in 1910.

There are other companies that the report highlights. Robert Bosch, Samsung and Sony are all entering the electric vehicle fray in one way or another. The EVIP asks if a cordless drill, cell phone or Walkman is on an evolutionary path to the electric car? Sony’s chief executive, Kanzo Hirai, says “We don’t have plans at this point but never say never”.

One of the newest companies on the scene is Faraday Future—a Californian start-up that has been reported to have had a few financial and personnel issues—it recently published a patent for liquid temperature regulated battery packs. Another new company making waves in the EV world is Superpedestrian—a Danish specialist in electric cycles. These companies could represent the changing face of the automotive industry—undistracted by 100 plus years of combustion engine R&D.

An electric vehicle report couldn’t go without featuring Tesla and its boss, Elon Musk. Tesla has a relatively small portfolio of just 78 patents in this report. Elon Musk has already said “In the spirit of the open source movement… Tesla will not initiate patent lawsuits against anyone who, in good faith, wants to use our technology.” Tesla believes that “applying the open source philosophy to [its] patents will strengthen rather than diminish Tesla’s position in this regard.”

Not all companies are as sharing with their intellectual property as Tesla. American Vehicular Sciences LLC (AVS) has already been involved in 26 litigation cases with defendants including Honda, Hyundai, Kia and Toyota.

The report also highlights the top technology areas for electric vehicles—known as international patent classifications (IPCs) and patents of high value. 1 in every 7 patents references IPC B60L11—"Electric propulsion with power supplied within the vehicle”. The most valuable patent for EV belongs to Qualcomm. The patent describes wireless charging and has an estimated value of over $43 million.

Electric vehicle patenting activity is on an upward trajectory globally. With the current growth trends, it’s predicted that there will be 8,500 patents filed in 2020. China and the US combined account for nearly two thirds of all priority filings for electric car patent families and both are marking themselves out to be the key geographic locations to lay down your patent footprint.

All the top applicants in electric vehicles are multinational companies—although activity has fluctuated in recent years suggesting there is scope for emerging organisations to get in on the action.

Experienced automotive companies remain diverse in patenting activity—while electronics companies tend to focus on fuel cells, batteries and power transfer technologies. The prominence and value of battery technologies means if you’re an ROI-driven R&D team, this might be the smart area to focus your team’s efforts.

In case you missed it, PatSnap also published the sister report to EVIP 2018—The Electric Vehicle Energy Storage IP Report.

Get your hands on The Electric Vehicle Intellectual Property Report 2018 by PatSnap for free.

The EVIP 2018 Report was designed and created using PatSnap. The Boolean search parameters were: