Your R&D might be worth more than you think, thanks to innovation incentives

Most businesses underestimate what they can claim from innovation incentives. According to the Telegraph, 40% of active companies in the UK generate some form of innovation, yet most business owners have no idea that they qualify for R&D tax credits.

I had the pleasure of interviewing Dr Remy Husein, Partner at Quaerit. Dr Remy has a background in R&D and engineering, and advises companies worldwide on innovation incentives.

He explained the different types of innovation incentives available to businesses and what you can do to make the most out of them. These include:

Dr Remy also dives deeper into fiscal and tax incentives. He explains what you should do if you want to receive the highest amount of reward for which you’re eligible.

Businesses can benefit from grants through fiscal incentives—however this can be quite competitive. The grants are awarded by Innovate UK, a government body. According to NI Business Info, Innovate UK’s funding competitions are intense and some focus on certain industry sectors whereas others are open to businesses from any sector. The grants are also open to collaborative projects, working with research organisations.

Dr Remy explained what businesses can do to put themselves in the best position to receive these grants:

“It’s important for companies to make sure that they have the right story, and they’ve got the right ideas to put forward. The reason you're doing R&D is because you're trying to establish a new way of doing something, and the outcome is not always certain.

“Companies have to convince the grant's authority that what they're doing is a genuine step change. It doesn't have to be ground-breaking. As long as companies can show that this is what they want to achieve… then that puts them in a stronger position.”

R&D must relate to a field of science or technology

According to HMRC, to qualify for the R&D tax incentives, the organisation must carry out work in the field of science or technology. R&D tax incentives can be granted for development work—including new processes, products or services that improve existing approaches. However, it’s important for companies to focus on the project’s aim and seek out what the scientific or technological advancement is, rather than detailing a process or a product’s functionality.

Regarding this issue, Dr Remy explained:

“For example, if you have a mobile phone company that's developing a new method of charging the phone, that method has to be fairly unique in the sense that if somebody else has done a similar thing, then that wouldn't be counted as innovation. If you're following an established method used elsewhere, that wouldn't qualify. If you're genuinely innovating, i.e. leading the trend, then that could be seen as a qualifying activity for R&D.”

Businesses can claim more from tax incentives than they think

You’re not restricted to claims relating solely to your core technology, you can also claim for the financials associated with it. Once you receive these incentives, you must ensure you get maximum value from them. Dr Remy gave an example of a company that was under-claiming.

“I'll give you an example of a company that we worked with. They produce design work for the construction and building industry. Initially, when we spoke to the company, they were using a traditional approach—looking at it purely from an accounting perspective, [with] a very small claim going through. They have their business not just in the UK, but [also] in other parts of the world. As a result, we managed to significantly increase their claim by 50 times.

“The good thing with the UK scheme is that it doesn't matter where the work is physically done. You could have a company based in the UK, but they might have their workforce out in Europe or somewhere else. Provided their cost is going to the UK profit and loss account, then they should be able to claim for that. Some of the companies that I worked with in the past have used low-cost staff in some of the countries in the Far East, and have managed to claim on their cost.”

Businesses are becoming more aware of the incentives available to them. A survey by HMRC revealed an increase in uptake of the R&D tax credit scheme. The total amount of R&D support claimed rose to £2.4 billion between 2014-15—a 38% increase from the previous year. However, businesses are yet to understand the range of things for which they can claim.

“In the UK system, there [are] two aspects to the claim. One is the technology side of things. It's about understanding how the technology maps onto the legislation, in terms of [defining] what's innovation. The other aspect is the financials that you can claim. What a company is able to claim is primarily the staff cost. They can claim for other things like software licenses [or] any cost paid to third parties, and that depends [on] whether it's a large or a small company. They can also claim for things like materials that are used in the process. So, for example, a biotech [company] might use a lot of chemicals for their development purposes, so that could be claimed for as well. Finally, you can also claim for utility costs like electricity, gas and water.

“Businesses must bear in mind that you can't claim 100% of all the costs—unless you’re doing pure research and development. You have to justify the proportion of the cost, and the proportion of cost that you claim must be backed up by the level of actual innovation and R&D that's been done.”

Having patented technologies can strengthen your position

Although organisations with patented inventions can benefit from Patent Box, having patented technology can also strengthen your position when claiming R&D tax incentives or grants. According to a study by the European Commission, the impact of a tax incentive on innovation will depend on the strictness of the novelty requirement. Without novelty, a tax incentive could stimulate imitation rather than innovation.

As a result, having patented technologies reinforces the idea that your products are novel and this can help in receiving R&D tax incentives.

“However, you don't have to have IP to qualify. It just makes it a lot more certain because the way the scheme works is that you have to justify why certain products, projects, or activities qualify as R&D. If you're able to quantify that with evidence, like patents or publications… then it just makes the case a lot stronger.”

Explore your options and look at the bigger picture

If you’re receiving incentives, you must look at the whole business to see what else you can claim for.

“First of all, if they [companies] are innovating and considering pushing new ideas out there, then they should consider, applying for these incentives—whether it's patent box or R&D tax incentives.

“In terms of actual tax incentives, what we often find is that the companies are not claiming the right amount. And part of the problem is the tax incentive is a combination of both looking at the technology itself and the financial side of things. A lot of companies out there use traditional accounting-centric approaches that purely look at the numbers and don't focus on the underlying technology. As a result, they end up picking the low-hanging fruits without looking at the bigger picture. If you're claiming tax incentives, it's always worthwhile reviewing it to see the scope to increase it, or the scope to look at other activities in the company. This is not just for small companies. Even large companies I've seen, where they are focused in one area, could be claiming for other areas.”

To make the most of incentives, R&D leaders must first evaluate the types of incentives available to them by looking at the type of R&D they are doing.

To make the most of the R&D tax incentives, you must ensure that you keep a record of everything you have spent throughout the R&D project. This could be in the form of invoices for software licenses, records of staff costs from different countries (provided the costs are going to the UK profit and loss account), or any other financial costs associated with the project because this can be used as evidence when you are claiming tax credits.

You should claim for anything that’s directly or indirectly related to R&D activities—even utilities such as the amount of gas, water and electricity used throughout the project.

Dr Remy is a partner at Quaerit Consultants. He comes from an engineering background and has managed teams at Invensys (a Schneider Electric company), KPMG and Lowendalmasai (now Ayming).

Dr Remy’s speciality is advising in innovation and finance. Quaerit Consultants offers a range of services, which can be broadly categorised into three sections: innovation finance, innovation advisory and investment research.

Learn more by watching our webinar

Watch our webinar with F.Initiatives who discuss innovation incentives from around the world. 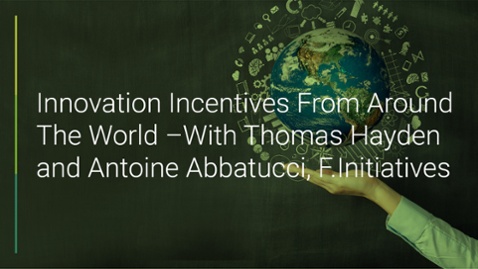