John Jacob Astor IV speculated in his 1894 sci-fi novel, A Journey in Other Worlds, that the turn of the millennia would see electric cars as the norm:

"The electric phaetons, as those for high speed are called, have three and four wheels, and weigh, including battery and motor, five hundred to four thousand pounds. With hollow but immensely strong galvanically treated aluminum frames and pneumatic or cushion tires, they run at thirty-five and forty miles an hour on country roads, and attain a speed over forty on city streets, and can maintain this rate without recharging for several days. They can therefore roam over the roads of the entire hemisphere, from the fertile valley of the Peace and grey shores of Hudson Bay, to beautiful Lake Nicaragua, the River Plate, and Patagonia, improving man by bringing him close to Nature, while they combine the sensations of coasting with the interest of seeing the country well."

Not a bad prediction really. Astor recognised that battery weight and capacity were key to his vision. But we’re pretty sure he hadn’t considered regenerative braking. 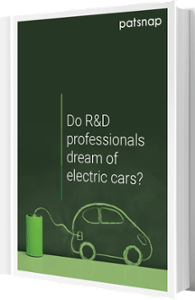 Successfully predicting 100 years into the future involves a bit of guesswork and a lot of luck. But what if we could predict what the market might look like in 2020? Could patented technologies and filing trends reveal the roadmap of the next few years? What is the next big thing? Who are the new entrants to the market? Should you be wary of any of them? And could you find game-changing partners and licensees?

Looking at intellectual property (IP) data of modern innovators in the electric car industry reveals signals about how this market, its players, and their technologies, are evolving. But these signals are suffering interference from loads of noise.

The results to a query investigating “electric vehicles (EV)” show the current of innovation is flowing in the direction of some obvious trends—yet, we found hidden gems in the undercurrents too.

Who holds the electric car keys?

Hyundai, Toyota, Kia and GM—well-known automotive manufacturers—are clearly some of the most patent-intensive companies in this area. Quelle surprise! Clearly these guys are not going to be giving up the EV IP driving seat easily.

But do Hyundai and co hold the patents that matter?

In fact, do patents matter at all?

Tesla: “All our patent are belong to you”

Bucking the trend for patent domination, Tesla’s IP portfolio of 101 patents (41st largest in our search), makes them look like minnows in comparison to the big fish mentioned above. But Elon Musk hasn’t become a household name ubiquitous with electric cars without having some serious clout within the industry.

“In the spirit of the open source movement… Tesla will not initiate patent lawsuits against anyone who, in good faith, wants to use our technology.”

“applying the open source philosophy to [its] patents will strengthen rather than diminish Tesla’s position in this regard.”

Unfortunately, not all companies are as altruistic as Tesla. In fact some are effectively stifling development.

IP disputes have broken many companies, or at least left their coffers looking a lot barer. Wouldn’t it be great to avoid hazards down the line by knowing from the onset where litigation threats are concealed?

The most litigious companies for EV patents (Source: PatSnap platform)

The above chart highlights the most aggressive plaintiffs in our EV search. American Vehicular Sciences LLC (AVS) has been involved in 27 cases with defendants including Honda, Hyundai, Kia, and Toyota.

Upon closer inspection, it becomes clear that AVS is a non-practising entity (NPE) and holds a substantial patent portfolio relating to automotive technologies. Companies entering closely related areas should take great care to avoid potential infringement situations—AVS is pursuing litigation as its main source of revenue.

Litigation isn’t the only way to make money out of intellectual property. By identifying and understanding the highest-valued patents within a field we can get an idea of which technologies and concepts hold the greatest growth potential. And it isn’t necessarily EV specific IP that leads the charge.

Reviewing the 10 most valuable patents reveals that batteries and charging technologies fill much of this space. And these patents generally have a long shelf-life left on them too.

Qualcomm owns patent US20130300358A1 “wireless power transfer for appliances and equipments“—essentially wireless charging. Due to the far reaching scope of this tech, this patent alone is estimated to be worth nearly $37million.

In fact, Toyota is the only car company (out of the big 4 IP holders) that appears in the top ten (or even the top 50) list of patents with the highest market value—making a strong argument for quality of patents over quantity.

US 2013/0300358 A1 - Wireless power transfer for appliances and equipments by Qualcomm (Source: PatSnap platform)

Tales of the unexpected

Looking below the fold, there are other key players you might not expect to see.

Sony and Bosch have a lot of patents relevant to electric cars (Source: PatSnap platform)

Is a cordless drill or the Walkman on an evolutionary path to electric cars?

There’s also a bunch of new companies and inventors gaining traction. These young upstarts could represent future competitors or potential partners. More importantly they may provide a glimpse into the kinds of products soon to enter the market.

Faraday Future—a California based start-up which describes itself as a “user-centric, advanced mobility company”—is the most patent-intensive new EV company. Despite reports that the company is having a few financial and personnel issues, it still seems to be pushing forward.

Faraday Future’s recent patents relate to all aspects of the development of electric vehicles, including US20170288286A1 “Liquid temperature regulated battery pack for electric vehicles”, published on October 5th, 2017, and US20170232931A1 “Remote control system for a vehicle”.

Interestingly, Superpedestrian is a Danish company that has been specialising in electric cycles. Are the established automotive manufacturers distracted by 100 plus years of combustion engine R&D? Could Superpedestrian be the sort of low-tech, disruptive innovation business that Clayton M Christensen warned us all about back in 1997?

‘Der be gold in ‘dem hills

A patent landscape is a 3D, topographical representation of patents within a technology space. These can give you a 360° view over any area of interest.

The peaks indicate areas with a high patent count—the crowded hills have been well explored and are more likely to have yielded gold. But there could be a few good nuggets still waiting to be discovered.

Valleys and “white spaces”, on the other hand, represent areas with minimal patent filings and unexplored frontiers.

The technology landscape (above) reveals the dominance of the top electric car companies (in red) around engines and braking. But if we remove their noise (see below), we can see how other players feature on the terrain and where their specialisms lie.

From a top line view, Hitachi’s specialisms appear to sit within braking and electric drive systems. Sony has a lot of investment in batteries. And Bosch is virtually covering the full spectrum of core EV technologies.

Highlighting licensing deals on the landscape reveals clusters of activity—some around charging stations, and more around electric drive systems. This suggests that these are technology areas where joint R&D is most likely to occur. It also reveals companies open to licensing their patents.

If you are new to EV, or need to take your project into the fastlane, could these companies fill technological potholes via licensing opportunities?

Technology development is moving faster than ever—making it essential to plan your R&D journey well. Wasted resources and losses of productivity could cause your latest novel concept to crash and burn—and become yesterday’s news in a flash.

Get more Insights with PatSnap

This report was designed and created using Insights by PatSnap with the following Boolean search parameters:

We encourage you to modify and improve upon these rudimentary parameters, so you can uncover the Insights that matter to you.