Why new product launches fail and how to save them

You’ve spent a year working on an incredibly innovative product. It’s novel, patent protected and will disrupt the market. Yet, it still fails. Why?

Each year, over 30,000 new products are launched and 80% of them fail. Businesses are obsessed with shipping their products early and beating their competitors—they are so overly focused on the design and manufacturing of new products that they neglect or rush marketing. Sometimes products are too early for the market because the timing isn’t right—the product doesn’t satisfy consumer needs, cost of production means pricing is too high, or the market positioning isn’t right.

However, there are usually ways your inventions can be salvaged.

Speak to your customers

Speaking to your target audience is paramount—they are the ones hopefully buying your product. If you can’t build a product to meet their needs, then your product probably won’t sell. One solution is to survey target demographics to find out why they would or, more importantly, wouldn’t buy your product. This can help you identify problems with your product—such as functionality or pricing. Customer service helplines, focus groups, surveys, social media, and customer intelligence platforms are great tools for market insights.

One company that effectively used customer feedback to make a comeback was Yahoo. Yahoo started off as a search engine, but as Google became more popular, its user-base shrank. According to Yahoo’s SVP and brand creative, Bob Stohrer, “anything we do, no matter how small, could be incredibly meaningful to our customer.” After listening to its customers, Yahoo decided to penetrate the media space and acquired Flickr and Tumblr—which led to a digital magazine, news section and a Yahoo Tech site with respected tech industry writers.

Rebrand or reposition your product

If your target market isn’t ready for your product, perhaps there is an alternative market that is ready for it. Go back to researching and identify if there are adjacent markets where your product could work well. International Patent Classifications (IPC) found in patent data can reveal trends in other industries with similar technologies—a potential new customer base for commercialising your invention. If you wanted to find adjacent markets for a “wearable device”, the IPC chart below could show you where similar technologies are being patented—such as medical and veterinary sciences.

Google took a similar approach to rebranding when they launched Google Glass. Consumers weren’t ready for these futuristic computer glasses—especially not for £1000. Google Glass was a flop, but Google persevered and the glasses  made a comeback. Google improved the technology and tested it with manufacturing and logistics based companies. Rather than selling to the general public, they sold their glasses to businesses such as GE, DHL, and AGCO—rebranded as “Glass Enterprise Edition”.

Early launches usually mean high production costs. This often leads to a high price tag—a classic barrier to sale. Customers won’t buy if it’s not worth the investment. Even successful and well-known companies like Microsoft have made expensive mistakes with pricing and launching too early. A decade ago, Microsoft introduced a smart watch with a new technology called SPOT (Smart Personal Object Technology). SPOT would use FM waves to gather information from MSN on sports, weather and news. Similar to Google Glass, the price—$150 initial cost and an ongoing monthly subscription—was too expensive and deterred consumers. Microsoft killed the project after 5 years.

Another mistake is pricing your product too low. If you’re a lesser known brand, consumers may think there’s an issue with the quality of your product. Ask your customers how much they are willing to pay—this should be a big influence on your final pricing strategy.

When you’re selling a service, pricing can be trickier. You need to make enough profit from your product to cover overhead costs, such as salaries, office expenses and heating. One solution is gradual and incremental price increases—not hiking prices overnight. Try increasing the price for new clients to see how much they’re willing to pay. Look out for too much push back though, it’s a sign that you’ve possibly gone too far.

License your technology to another company

If your product failed because you were too early to market, licensing your idea might be a better way to commercialise your innovation in the future. According to Entrepreneur, licensed inventions have the most potential return on investment and the greatest chances of success. Additionally, if you’ve already patented your invention, you’re more likely to get a lucrative licensing deal with larger, established companies with a stronger presence in the market. Licensing can help increase market penetration, reduce costs and help you access an expertise that you may not have in-house—possibly the reason your product launch failed in the first place.

You can find potential licensing opportunities using the Licensee Locator on PatSnap. It helps you find compatible businesses who may be open to licensing your technology based on your patent.

On PatSnap’s Licensee Locator, a search for patent number “US20160198319A1 - Method and system for communicatively coupling a wearable computer with one or more non-wearable computers” shows relevant companies that could be interested in licensing this patent. The results are ranked by various factors, including a licensee strength score—helping to identify a company’s openness to licensing opportunities for a strong ROI.

When it comes to innovation, we often only see the end product of a successful idea. What about those ideas that didn't quite make the cut? In this webinar, Niosha Kayhani, R&D engineer at Cubic's Innovation Centre, discussed how Cubic speeds up their innovation process with a unique workflow. 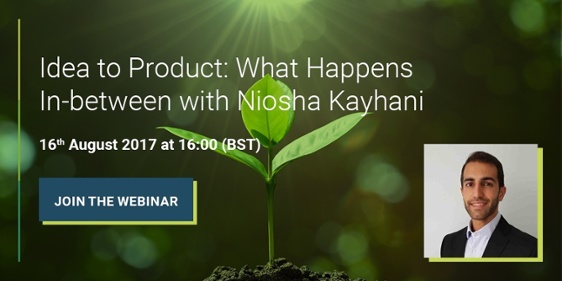