5 signs you should scrap your patent

Abandoning patents is necessary for companies that manage large portfolios, with thousands of patents. Some patents aren’t valuable anymore, yet remain hidden in a large portfolio, adding to your yearly renewal fees. According to Manny Schecter, Chief Patent Officer at IBM, abandonments can contribute to, rather than jeopardise the pursuit of high quality in the patent system. Research also suggests that companies with the largest portfolios, like IBM, abandon the most patents.

However, it can be difficult defining an efficient and profitable framework for deciding which patents in your portfolio to keep or scrap. So, here are 5 signs which suggest a patent should be scrapped:

1) Your patent has a short shelf life

Some patents have a short shelf life because they were filed to meet imminent strategic needs, but serve no long-term purpose.

For example, the US pharmaceutical industry is so competitive that large companies file many patents (under the first-to-file system) to block their competitors. However, some of the drugs that are patented don’t reach commercialisation, after going through clinical trials and FDA assessment. Research suggests that in the pharmaceutical industry, innovation costs are high and regulatory approval increases time to market. However, few R&D projects result in marketed drugs, therefore patents are considered an essential factor in protecting any competitive advantage. Furthermore, two thirds of drug launches don’t meet expectations and just one in 5000 drug candidates makes it from the drug discovery phase to licensing approval.

What happens to the rest of the patented drugs that don’t make it to market? Maybe those patents are sitting in your portfolio, accumulating needless renewal fees.

2) You’re being overcharged for renewal fees

For large companies with huge portfolios, it can be tempting to get an agency to help manage patent renewal fees. However, there can be hidden costs associated with this. According to Renewals Desk, patent renewal fees are usually around £100 but you can be charged up to 4 times the actual cost of these payments.  Renewals Desk explains that businesses put up with this for two reasons.  Firstly, it is difficult to find out exactly how much is payable and secondly, they don’t trust themselves to make this important payment every year. According to IPKat, this is because patent owners are used to regular bills and because the patent laws are so complex and bills in the patent world are high, they find it difficult to challenge these bills.

By keeping track of which patents are up for renewal (rather than the entire portfolio), you can have transparency on what you’re paying for. This will ensure that you have better control over which patents you want to renew or abandon. It might also make it easier to pay renewal fees directly to the patent offices or audit your agent.

3) Your  patent’s valuation is declining

A good indicator for portfolio management is patent valuation. According to the OECD, as patentees have to pay to keep their patents in force, there’s an incentive to stop renewing patents once their valuation falls below a certain threshold. If a patent has a valuation that’s lower than other patents in a similar technology space, or if its valuation has been declining over the years, then it may be worth abandoning.

According to the American Bar Association, many patents protect technologies which represent modest improvements to existing products. These improvements on their own might be valuable, but relatively less valuable in comparison to existing means of accomplishing the same outcome.

It doesn’t make sense to keep a patent which protects an invention that is no longer in use or the industry standard.

For example, if you have a 15-year old patent on a technology in the CD-ROM space, it’s probably worth abandoning because there are now more accepted and advanced technologies out there. However, it may be worth keeping the patent in other territories where this technology is still widely used, because some competitors may still be operating there. For example, according to The New York Times, 85% of music in Japan is purchased via CD whereas digital music sales are on the decline.

5) Your patent has no forward citations

A patent with no forward citations indicates innovators in your space aren’t building on the protected technology—which suggests it may not be valuable. According to Forbes, businesses must ask how important a patent’s underlying invention is by looking at how often that patent is cited by others. Furthermore, research suggests that a lack of citations indicates a patent with a low valuation—so if your patent has no citations it may be time to abandon it. However, keep in mind that younger patents that are valuable may not have any citations, simply because they have not had the time to accrue any. This indicator is most useful for evaluating patents that have existed for a few years—at least the length of time it takes within your industry, to turn a vague idea into a patented invention.

Watch this free, on-demand webinar in which Duncan Clark, Head of Product Marketing at PatSnap, discusses how patent portfolio managers can make better decisions on which patents to sell, license or scrap. 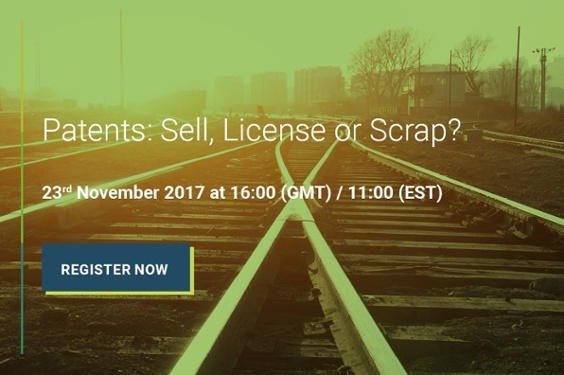