Just in case you’ve had bananas stuffed in your ears for the last few years, IoT is the abbreviated name for the “internet of things”. The internet of things, in its simplest form, is the networking of devices, via channels like Bluetooth, WiFi and 5G, to exchange data. It is expected to become big business—currently enjoying an exponential growth curve.

Gartner predicts that IoT security spending alone will reach $1.5 billion in 2018 and that by 2020 there will be 20.4 billion connected things in use globally.

The potential benefits of the internet of things really comes down to the ability to put sensors into pretty much anything—from cattle to shipping containers—and to remotely communicate with each device to produce positive outcomes.

How could IoT work at home?

An example of an IoT setup in the home could perhaps comprise of a smart chip being installed into your coffee machine, which, prompted by your smart duvet (which temperature regulates you through the night, monitors your sleeping patterns and can sense your morning rousing) gets you a fresh brew ready for when you wander down to the kitchen. It might also use these cues to turn on some lights and kick the underfloor heating into action, while your smart fridge lets you know you’re almost out of milk and adds that to your online shopping list. While you’re out at work, these devices will report back to their hub, checking for updates and preparing for your return home. The autonomous vacuum cleaner will whizz around the flat and suck up the crumbs, the heating will automatically adjust for power savings, the doorbell system will alert you that your delivery has arrived—and you can tell the driver to leave the package under the doormat via the video intercom. You arrive home a little late, but fortunately the TV knows you love that quiz show—and has automatically recorded it. Your food delivery arrives, with your milk—just in time because the cat, has entered (using his retinal scanner cat-flap) and he loves milk.

And all of this without much more than a simple initial set-up and some clever machine learning.

The reality of this is, perhaps currently, not quite as idealistic—as Kashmir Hill and Surya Mattu can testify—but in the future it might well be. As long as we learn to trust our devices.

Domestic uses are probably going to be the hardest market to crack, but industries such as agriculture, manufacturing and construction are already starting to adopt the IoT. 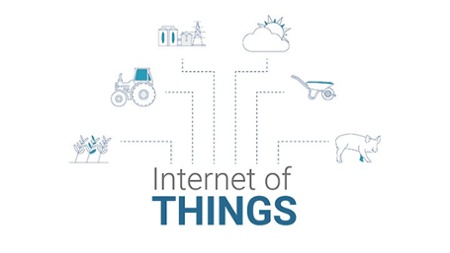 £750 million has already been earmarked by Innovate UK and the Industrial Strategy Challenge to help the British contingency step up to the plate. Expect the aging population, transport and quantum to be high on their hitlist of IoT development opportunities. And the British Standards Institute (bsi.) aim to help to influence interoperability standards to effectively increase adoption for IoT tech.

Using intellectual property (IP) data, we take a gander at how the internet of things is evolving, who the key players are, and what we might expect in the not-too-distant future.

Patent applications and grantings for the internet of things (source: PatSnap platform)

Innovation rates are going through the roof. 19 patent applications were published on the 20th of March 2018. That’s more publishings in one day than applications made in the entirety of 2007. And we can see the upward trajectory doesn’t look like stopping. It is worth noting that there are likely to be many more patents published from 2016 and 2017 applications over the next 18 months.

Looking at the major players in the industry we can see that Samsung are owning this technology space in terms of active patenting—626 patents, vs second place Qualcomm on 231 patents.

The biggest patenting companies in the internet of things (source: PatSnap platform)

Other interested parties include ZTE, Intel and the State Grid Corporation of China.

High concentration of patenting activity from Samsung in 2017 for IoT (source: PatSnap platform)

And breaking down that activity by year we can see Samsung’s interest is from a huge boom of activity in 2017.

What might seem surprising is Korean giant Samsung has concentrated most of their patenting activity not in South Korea, but in the USA.

But looking at these key players only reveals one section of the story. The big hitters might be concentrating their efforts upon filings in the US, but China is the heaviest hitter in terms of patent filings overall—holding a huge 55% of all IoT filings.

And China has a 4-year head start on the rest of the world.

This landscape slightly changes if we look at granted patents only. China still retains its dominance as a filing nation—in fact it increases its stranglehold on the industry and increases it’s share to 73%.

But Samsung loses its crown and slips back into fourth place for patenting activity. Qualcomm in particular begins to flex its muscles and zooms into first place.

And looking at common concepts referred to in Qualcomm’s granted patents gives a quick overview of the major themes it has sought and gained protection over.

If trend predictions are right, IoT will soon make an impact in all our lives. And humans will have to accept that everything around them is becoming smarter. But the intelligence of a device isn’t the issue for uptake now. There are 2 key factors that will influence the uptake— interoperability and security. If one device doesn’t talk to the next device, then the network breaks before it even get a chance to begin. And in a world where software vulnerabilities, hackers and some dubiously unethical companies exist, trust is a commodity that won’t be easily obtained and certainly can’t be taken for granted.