Patent prosecution can be a painfully slow process. And not because the office is processing applications slowly.

Patent prosecution is usually slow because of you, the applicant. Applicants often slow down the patent prosecution process by amending their applications through the EPO and USPTO, according to a recent WIPO report. The WIPO report also showed that the pendency time for patent applications was between 22-23 months in the US, Europe and China. The shortest pendency times were in Iran (9 months), Spain, Ukraine, Japan and Republic of Korea. Surprisingly, the highest number of rejected patents was in the US at 52%.

Former US patent examiner Rachel Bennet says other factors can affect the speed of patent examinations. These include broad, irrelevant claims, missing documentation, miscommunication and misuse of examiner interviews. However, you can use some simple techniques to speed up patent prosecution and get your patent granted.

Original claims should be reasonable and as few as possible

Although filing broad patent claims is desirable for businesses—to cover future uses of their technology—patent examiners prefer if you have narrow claims. Usually, patent examiners will not allow broad claims because they cover more than the inventor actually invented.

When constructing claims, ensure you make the novel and non-obvious features of your technology clear—which will speed up your patent application. Rachel says, "The examiner only has so much time, so keeping the original claim set reasonable is ideal."  Patent examiners don’t want to dig around to find the needle in the haystack—they are under time constraints too. Although you may worry narrow claims could be easily modified by a competitor, such claims are easier to obtain.

File narrow claims first—to cover the core elements of your invention—and get your patent granted quicker. Then, file for continuations to ensure you have covered every future application of your technology.

You should also disclose any prior art that you are aware of, otherwise your application could be invalidated if something comes up later on. If this is the first time you are filing a patent, providing all the relevant documents will help build a good relationship with your examiner.

Rachel says you need to understand the examiner’s time limitations and do what you can to streamline the application. “No one wants to spend time cleaning up 112 issues or translating a document. Attention to these details will only win you points with any examiner. The examiner’s supervisor also plays a vital role in allowances, especially if the examiner doesn’t have signatory authority.”

Clarify issues by communicating directly with the patent examiner

Emails are easy to use and quick to send so it’s no surprise most communications between examiners and patent applicants occur this way. However, when it comes to patent applications, email may not be the best approach. Sending emails back and forth to clarify issues could delay the process. If you have questions about your patent application, it’s better to speak to your examiner over the telephone—have a face-to-face conversation through Skype, for example. Or, if you are in the US, meet them personally at a USPTO campus. Instant communications reduce latency and can help prevent misunderstandings or miscommunications. For example, one study found that face-to-face requests are 34 times more likely to get positive responses than emails. The USPTO offers an easy solution—the First Actions Interview Pilot Program—in which you can request an interview with the examiner evaluating your patent application.

According to Rachel, “A simple telephone call, web conference, or face-to-face interview can bring clarity to issues that may be 'lost in translation' in office actions between the patent practitioners and the examiner. Inventors may also be helpful in explaining the nuances between their invention and the prior art.”

The examiner’s time is crucial so it’s important not to misuse one-to-one time with them. Ensure your requests are specific and relevant. Examiners want to help expedite your application. But wasting their time will usually leave them irritated. Rachel futher explains the importance of interviewing examiners without fishing expeditions: “While most examiners are happy to help clarify issues and to an extent suggest alternative claim language, they also need to move the ball down the field with every application. If a practitioner is not furthering prosecution, this may be perceived as a waste of time for the examiner.”

One survey revealed that 38.4% of applicants thought an interview with the examiner was very useful, 30.8% said an interview was extremely useful, and only 2% said it wasn't useful at all. To use your examiner’s time wisely, you may want to schedule an interview after the first action (when an examiner informs you of the result of your applications) with some proposed amendments to your claims. This will ensure you aren’t wasting their time, and that you're talking to them specifically about your patent application rather than questioning them before they have fully evaluated your application.

Another way in which you can speed up patent prosecution is using the Prioritised Patent Examination Program or the Patent Prosecution Highway (PPH). The Prioritised Patent Examination Program gives a utility or plant patent application priority, allowing a final disposition within twelve months. It gives your application special status with fewer requirements and without having to perform a pre-examination search.

It's important to remember that patent examiners are on your side; they want to quickly process patent applications too. These five strategies can help build a good relationship with your examiner. By understanding the patent examiner's time limitations and communicating with them effectively, you can make their life easier and speed up your patent application.

Learn more about how you can increase your patent allowance rate

Join this webinar with Gene Quinn, patent attorney and publisher of IPWatchdog.com, and Lauren Anderson, a patent attorney with Womble Carlyle, for a wide-ranging discussion on examiner statistics, pressures and expectations. 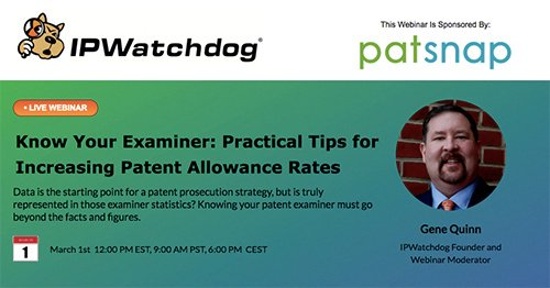